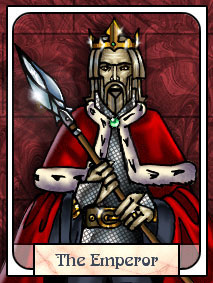 The Emperor, a regal man in middle age, exudes confidence and accomplishment. Crowned and dressed in ornate robes, he surveys a barren domain. At his feet is a shield bearing the device of an imperial eagle, symbol of worldly power and aspiration. The arms of his throne are decorated with ram's heads, and the Emperor holds a septre with a ram's head. these symbols related to the astrological sign of Aries, which govern the card. Only one side of face is seen. This suggests that the Emperor is only concerned with one side of life. In a woman's reading this card can show an important man with paternal overtones.

Meaning: High honor, the achievement of ambition. It may show an influential man whose help may be required. It is the card of bosses and people in authority. The Emperor represents the man in control in any given situation or problem. To a woman, he may represent her husband or father.

Reversed Meaning: Tyrannical attitudes and the abuse of power. Ambitions unfulfilled and a carving for status.