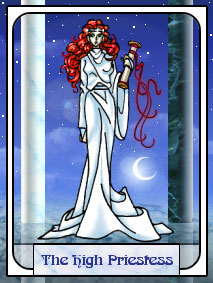 The High Priestess or Female Pope, is shown as a wise woman dressed in blue-white robs reminiscent of the virgin marry or of a Nun. In many traditional decks, she wears the Triple Crown similar to that of the hierophant, but here she wears the Horned crown of the Goddess ISIS. She holds a scroll marked "TORA" and sits between two pillars representing severity and mercy. Her robs are patterned with Pomegranates. Suggesting the mystery of Life and Death. It is also a symbol of Virginity, and so by implication of the Virgin Moon Goddess who sheds the Morning due, according to ancient belief.

Meaning: When the high Priestess appears in the cards, a secret is about to be revealed. Often the card shows a feminine influence, and in a mans reading, it can represents the most important woman in his life. The card shows mystic powers. psychic ability and the unconscious mind. It relates to the memory and intuition. Reply on instincts.

Reversed Meaning: Delay all plans, because there are hidden obstacles or enemies. be discreet.