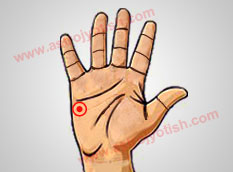 The place of this Mount is a little above the bracelets, dividing the Mounts of Venus and Moon and is near the starting point of the fate line. This planet shows its influence from the 5th year to the 20th year of age. If the Mount is ordinarily prominent and protruded and the fate line is deep and clear, the person would be fortunate and shall enjoy all pleasures in his lifetime. If the Mount is unusually protruded and the fate line is weak then he has to experience hardships in his young age. The financial position of his family also gets worse day by day.

The Mount of Neptune

The area of this planet on the palm is below the head line and above the Mount of Moon. A man becomes an eminent Musician, Poet or Writer if this Mount is very prominent. If a line is seen on this Mount and this line meets the fate line a little ahead, the person gets some post of great importance.

If this Mount is developed more than enough then such a person's life would be full of grief and his family life would be spoilt. They are maniacs, suspicious and cruel

The Mount of Pluto

Its area on the palm is below the heart line and above then head line and is situated between the Mounts of Harshal and Jupiter. This Mount can be clearly seen on the hand of every person.

Its influence can be seen only in the old age. If this Mount is very prominent, then the person passes his old age happily. If a cross sign is found on this Mount, the person will die before the age of 45 in an accident.

If the Mount is too prominent then the person would be rude, illiterate and prodigal and has to face many difficulties in life. He would not get any co-operation from his family and friends.

If the Mount is not prominent then the person would be unlucky. His nature turns irritable and troublesome.