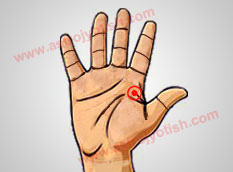 Its area is situated below the headline, surrounded by the Mounts of Moon , Mars and Venus. The fate line passes over this Mount while going towards the Mount of Saturn.

If the Mount is less protruded then the person would be a restless character and will lose all his wealth.

This planet is more powerful and exerts more influence in comparison with the other planets. It has its area of influence on the palm between the Heart and the Head lines. Its area is a little below the little finger and the Mount of Mercury. This planet influences the heart and the brain. A man having this Mount below the Mount of Mercury and between the heart and the head lines becomes a world-famous Scientist or Mathematician. They become successful dealing with atoms, televisions and other intricate items.

If this Mount is less prominent then such a person takes interest in the works connected with machines. He becomes famous throughout the world if a line comes form Harshal and goes towards the fingers of Apollo.