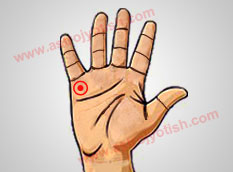 The prominent part on the base of the finger of Mercury is called the Mount of Mercury. This Mount shows materialistic prosperity and affluence. But much importance is not attached to this Mount of late.

Persons with greatly developed Mount are clever and crafty and are adept in cheating. If the Mount is ordinarily developed and has a square mark on it then such a person would be a criminal of higher order. Such persons believe in breaking the law. Persons with prominent Mount are experts in Psychology and know how to influence others. They gain success in business.

If the Mount is very much protruded then such persons are after money and the main aim of their lives is to amass wealth.

If the Mount is absent in the palm of a person then the person passes his life in poverty. If the Mount is ordinarily prominent then he would be interested in inventions and scientific works.